The entries are in!  My thanks to everyone who participated, and for those who passed the contest along.  To the victor(s) go the spoils, and in this case the “spoils” are signed copies of my acclaimed, bestselling, hard military science fiction space opera blockbuster A Sword Into Darkness, featuring those COOLEST of ships, the Sword-class astrodynamic destroyers and the Trenton-class cruisers.  But, to the matter itself!  What ship among the entrants is truly the coolest of ships in all of science fiction?  The choices (and my thoughts on each) are:

*First, I made an error.  I attempted to ask what is the coolest of ships, but failed to define what exactly coolness was, trusting that all you little Fonzies out there would JUST KNOW COOL WHEN YOU SAW IT.  Problem is, there are different kinds of cool.  Is it crazy, wacky cool?  Is it super-realistic cool?  Retro-cool?  BADASS-cool!? Therefore, I have picked more than one winner (I’ve got those extra copies, after all), one in each of my completely arbitrary categories of cool.  Why?  Maybe I’m just cool like that.

Winner, the First, Category of BADASS-Cool:  the Battlestar Galactica! In the words of our victor, J. D. Locke, the BSG protected 35,000 civilians from Cylon fleet for 4 years across the galaxy, all w/o repair/resupply.  Now, me, I’m thinking the re-imagined BSG, not the original or the 1980 version.  There were just so many cool scenes with that ship:  the Atmo Jump, all the tracer rounds and missiles, soooo much damage survived, and her final assault on the Cylon secret base.  It just doesn’t get cooler than that.  Now, this was not the only vote for the mighty BSG, but as J.D. came in first, he’s the big winner.  However, I’ll be sending our second BSG voter, Simonas Juodis, a signed Advance Reader Copy as well!

Winner, the Second, Category of Kitschy-Cool:  the TARDIS from Doctor Who!  It’s bigger on the inside than it is on the outside, Time and Relative Dimension in Space, police boxes!!  The only things cooler than the TARDIS are probably fezzes, and we ALL know how cool fezzes are, right?  The winner here is Sam Hidaka, an old acquaintance/friend, who helped me make my first two pro short fiction sales.  I owe him my appreciation for making me a better writer (but that’s not why he won).  Sam, I hope you enjoy the book!

Winner, the Third, Category of Literary-Cool:  the ships rendered in visual media kind of have everyone else at a disadvantage.  You can SEE just how awesome they are, the product of pure Hollywood SFX magic.  In a totally different class of cool are those ships that simply LEAP off the page and take flight within your imagination.  And to judge this one, I had to either recognize the story, or your reasoning/description had to be compelling enough to sell me without foreknowledge.  In this case, the winner was absolutely clear-cut:  Ann McCaffrey’s B&B “shellperson” ships, for Brains and Brawn, for the two people bonded with the ship, as in the Crystal Singer series, The Ship Who Sang, and The City Who Fought.  In the words of our winning submitter, G. W. Pickle:  They used a black hole in the drive system. The Brain of the ship was a deformed human encased in a titanium shell and controlled all of the ship. The Brawn partner did all of the physical work and maintenance.

Runners-Up, Awarded a “gifted” Kindle copy of A Sword Into Darkness:  there were just so many neat entries, properties that I either want to go back to and re-read or re-watch, as well as properties I’ve never heard of before that I simply must experience for myself now.  These include Pat G with the carrier from Warpwar, Dan Glass with the Star Wars IV Rebel Blockade Runner, Arzvi with the ESS Adam Wickiewicz from Crash, Harliqueen and Joel Salomon with Serenity from Firefly/Serenity, B. W. Hartley with Gay Deceiver from The Number of the Beast, John Tae with the Cannon Space Guard ship from The Dragon Never Sleeps, and Rhonda Mason with Moya from Farscape (I’d have gone with Talyn myself).

Now, if I had to come down in favor of only a single ship as the coolest ship in Sci-Fi, well, I’d have to stick with my military sci-fi / space opera roots and go for the new-version Battlestar Galactica.  It’s just hard to keep a ragtag fleet together, you know?  Now, I was genuinely surprised there weren’t more entries from the Star Wars universe, and nothing from Star Trek, or Babylon 5, etc., but you go with what you get.

Am I right?  Am I wrong?  Hash it out in the comments below!

Congratulations, all.  I’ll be in touch to get your shipping addresses and will have your books to you presently.  I hope you all enjoy my book (and all its cool ships) and I look forward to hearing your thoughts!  As for all of you who didn’t enter in time or win, A Sword Into Darkness is on sale now on Kindle and as a trade paperback.  Don’t be the only one in fan-dom who doesn’t know what the buzz is all about!  Order yours today! 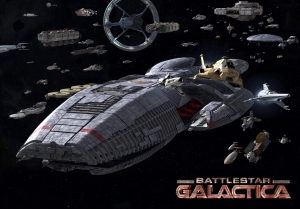