Howdy, all!  Just coming off a great weekend, great for sales (orbiting in and out of the Top 500 Kindles on Amazon), garnering great reviews (and one who was NOT a fan (sorry, dude)), and gathering some truly great numbers here on the blog (my highest number of hits EVAR).  I really should hold contests and make dictates about sci-fi-coolness more often.

And now I’m about to sit down to an Irish/New England Boiled Dinner, with corned beef, kielbasa, linguica, potatoes, onions, cabbage, carrots, and my third Guinness of the night.  St. Paddy’s Day tis a wonderful thing!

Being that things are rosy in writerly circles, I decided to doff my writer’s hat (it’s a dunce cap) and try on a couple of my other hats in order to challenge myself.  I left the Real Job’s hat in the closet, because who wants to think about the real world on a day like today.  Instead, I whipped out my artiste’s beret, and decided to focus on myself as a visual arts fella’.

As those of you who follow know, I did my own art for the book, and from that art, I created my own cover.  Now, I think I did a good job, and I don’t believe the amateur nature of my cover has done my sales any harm.  But, not all books can say that, and it is generally advised that any writer who hires himself to do the cover art for his own book has a fool for a client (that saying may have originated elsewhere, I don’t recall).  To determine whether or not the aphorism applied to me, I decided to put myself even further out there.  First, I offered up my cover to the new site CoverCritics.com for the inaugural week.  Nathan Shumate also runs LousyBookCovers.com, but this new site is all about CONSTRUCTIVE criticism rather than schadenfreude.  I encourage all of you aspiring cover artist/writers to check out BOTH sites before you attempt to do it yourself.  As for how I did, the consensus seems to be that the art is good, it sells the book and clearly lays out the genre, but my title fonts don’t really fit the SF tone, and I tried to be too clever by putting in a metallic texture.  I can’t fault the criticism, and when I eventually do put up a revised edition, I’ll see about applying them.  Another guy criticized my lens flare, but if it’s good enough for J. J. Abrams, it’s good enough for me!

By that same token, I also entered my cover in Joel Friedlander’s E-book Cover Design Awards for the month of February and the results came back today.  Well, he liked it and thought it was “effective” and he really liked the picture itself, but I didn’t win the grand prize or get a gold star.  The competition was fierce, but Mr. Friedlander also likely saw the not-quite-right part of the titles that the others saw as well.

That’s things on the artist front, but I promised TWO hats in the title.  Thusly, I doff the beret and slide on a Mad Men – esque fedora, straight from central casting.  Wearing this hat, I’m focused on things of business and networking.  Namely, I need to get out there more into the publishing industry, to meet authors, publishers, agents, and fans that might not have come across my Amazon postings or tweets.  So, I’m going to take the ultimate SF nerd plunge and attend my first sci-fi convention.

The next con in my region is RavenCon, up in Richmond April 25-27.  I’ve got the hotel room, the registration, made contacts with the Baen Barflies (the only people I know in attendance, and then only by forum postings), and I’m ordering fresh copies of the book to pass out and have commissioned an ad for the con program (below).  I think it’ll be a lot of fun (my kind of fun — I couldn’t get the wife to even consider going).  Hopefully, I can make some contacts, help the book and its eventual sequel, make some friends, and build some memories.  A lot of the sniping, scandals, and arguing amongst fandom concerning “true” fandom, acceptable thought/attitudes/speech, and thin skins vs. true harassment that have been destroying the internet lately have me a little nervous, but I largely cannot help whatever has come before or where things stand now.  I hope RavenCon doesn’t get too issue-oriented or political, but my general plan — as it is in all things — is to just be friendly, fun, and fascinating, and trust that my humble awesomeness will shine through to sunder all barriers.

I’ve got this in the bag! 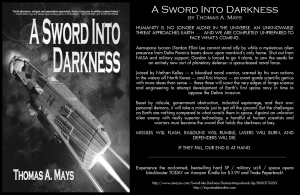 After posting the umpteenth tiny tweak to my cover on Createspace for the upcoming / potential Stealth Books edition of A Sword Into Darkness (assuming Baen does not buy it), I checked in at Lousy Book Covers for my daily dose of schadenfreude.

I was unprepared for the magnificence I would behold.

Gird yourself for the boldest artistic and authorial vision that has ever been put in print.

As I finalize my “A Sword Into Darkness” cover design, back-cover copy, and polish off my mad Photoshop skillzzz, I was keen to look around for advice on how to do it right, and — more importantly — how to do it wrong.  Thus, I discovered the following hilarious and frightening treasure trove:

You’ll lose at least a day browsing.  Now, I’m off to completely re-design EVERYTHING!