Tom here, writer of all that stuff over there to the right (or below, if thou art a visitor from the mobileverse), here with a progress report.  I’m very glad you stopped by — make it a regular thing! 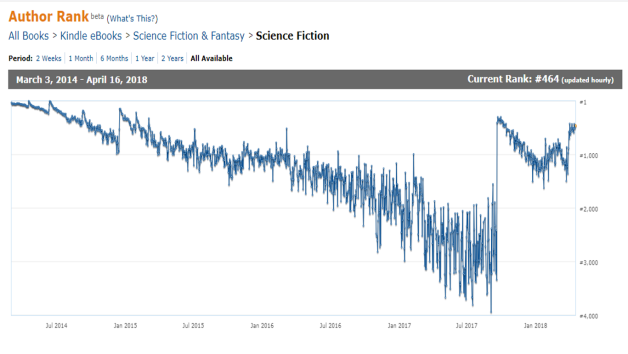 However, it has not drawn the massive numbers of eyes either ASID or the Fourth Horsemen Universe novels have.  A couple of 4HU novels have been released since TMD, and they are all outselling it.  Now me, I’m very proud of TMD.  Its writing, characterization, and complexity are much better than ASID’s, and Chris seems very happy with what we did as well.  So why isn’t it boosting through the roof?  I dunno. The cover?  I love it, but it does look much different from the other covers in its sub-genre.  The fact that Chris’s fans weren’t expecting my hard sci-fi space stuff, and my fans weren’t expecting his gritty ground-level teen rebel angst?  Now me, I think of it like Reese’s Peanut Butter Cups.  “You got your chocolate in my peanut butter!  You got your peanut butter in my chocolate!”  They’re two great tastes that go great together, but for fans that aren’t expecting the other, does it look like a Frankenstein’s Monster amalgamation?  I dunno.  I think the main issue is that we need to get eyes on it and reviews in it.  So far it’s received 29 positive 4 and 5 star reviews on Amazon, and only got one negative-ish one rating on Goodreads.  The fellow involved tweeted with me and he regretted the fact that he just bounced off some of the plot choices in the last few chapters.  That’s gonna happen, so I’m not bent out of shape.  Me?  I’d love to hear what y’all think?  If you’ve given TMD a read, please consider messaging me and/or giving it a review.  If we can get the numbers up, the Amazon algorithm will start to work for us, and bring more eyes on.  I also have sent out a number of review copies that I hope will begin to bear fruit soon.  (and if you are a reviewer, I’m happy to send you a paper or e-copy with my compliments)  We are not sitting idly by awaiting an audience, however.  Chris and I have already met up and semi-plotted out the next two books in the In Revolution Born series, and each is more epic than the last!  Now is the time to get on board.

2.  Speaking of A Sword Into Darkness, followers on Twitter will know that I’ve finished the first “half” of the sequel Lancers Into The Light.  I put “half” in quotes because it finished about 40% over my targeted word count.  The first half is practically a novella in and of itself at 70K words vs the planned 50K words.  I’m mighty tempted to just publish it stand-alone, but it really should have the second (smaller) half to balance it out.  I still plan to finish the second half by summer and have the book out before fall, so stay tuned.  In the meantime, if you would like to be a beta-reader for the first half, so I can fix whatever doesn’t work while I’m building off of that in the second, please drop me a line.  You will need to have read ASID first, but the numbers say there’s about 40,000 of you that have done that, so just let me know.  It’s been a long, arduous, frustrating 4 years of work on the sequel, and my profound apologies to those who gave up on seeing it, but life intervened and I lost the will and wherewithal to work on it for the longest time.  With the patient support of fellow writers and my lovely girlfriend Kristin, however, I’M BACK, BABY!  Stay tuned!

3.  And for those who DON’T know what I’m yammering about, and who would like a preview of what my writing is like before you try on The Mutineer’s Daughter or put Lancers Into The Light on your pre-sale list, there’s NEVER been a better time to try out A Sword Into Darkness.  On April 20th and running through the 27th, ASID will be ONLY 99¢!  And if you are a Kindle Unlimited member, it’s free like always!  ASID is a good bet, with around 420 reviews at Amazon to help convince you.  So, try it yourself, push it onto your friends and family, proselytize it to your co-workers until security carts you out of the building.  DON’T MISS OUT!