No foolin’!  This weekend, from March 29th to April 1st (April Fool’s Day), the Amazon Kindle edition of A Sword Into Darkness is only a pence less than a POUND STERLING!!!

It’s the United Kingdom’s turn to have a Kindle Countdown Deal, so you can spend a mere 99 pence … 99 p … £ 0.99 … less than tea and crumpets … less than fish and chips … yes, for far less than her Majesties’ tinder of snuff, you can have my acclaimed, bestselling novel in handy electronic format.  Guvnah.  Here’s the Amazon UK link.

Is that racist/statist?  I dunno.  For less than a single Amazon Instant download of an episode of Doctor Who from the Beeb (the BBC, not Justin Bieber, I have no idea how much he charges for quirky sci-fi), you can have hours to days (depending on reading speed and available time on the loo) of kick-ass American outer space  adventure.  Adventure which features a British space warship squadron in the awesome climax (spoiler!).  C’mon, you can’t beat that with a riding crop (which you have because you’re going fox hunting).

Let’s see, let’s see, what other stereotypes can I shoehorn in here . . . OH!  I would be honoured if thou wouldst try mine novel!  Hmmmm.  That was kind of a mix of the Queen’s English and bad faux-Shakespeare.  Anyways, Big Ben is ticking, my dear Scots, Brits, Welsh, and N. Irish.  Don’t let the deal of the , , , long weekend pass you by!!!

Spread the word!  How do you say “viral” in English? 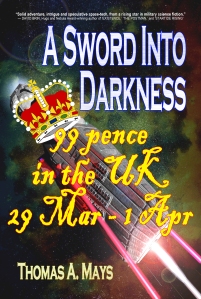 Note:  Everything I know about the UK is from CGP Grey: